Who is the Partner & Senior Director of Wavemaker?

What is the email of the Partner & Senior Director of Wavemaker?

What is direct phone of the Managing Partner & National Broadcast Talent Director of Wavemaker?

Who is the Media Buying, Media Planning agency of Wavemaker?

reported last year, as it still believes these efforts sustain "top-line sales growth," per the latest earnings call. The 360 marketing approach shouldn't slow any time soon, since Tiffany refers to it as a "multi-year" plan. As part of the plan, experiential elements will continue growing to enhance the in-store experience, including visual merchandising and jewelry styling bars. This especially appeals to millennials who want to compare as many options as possible and save money doing so.

The shift in product focus is likely also influenced by the sales decline in 2018's holiday season, largely due to the engagement lines, per Forbes. Jewelry collections reportedly took 53% of sales in October 2018, so sellers who can get these lines in front of new-money millennials and Gen X female demographics should reach out.

Q4 2019 will likely reflect last year's holiday season. One thing that has hopefully changed is the targeted demographic for more expensive lines; much of the declined sales growth in Q4 2018 is reportedly also due to the upper-end jewelry segments, such as the Paper Flowers launch, which featured younger celebrities that were not immediately recognizable to a boomer who can afford $2.5k jewelry pieces. New-money millennials do not tend to steer towards upper-end jewelry, per Forbes, even though this is traditionally Tiffany's top targeted demographic.

In global stores, such as China, Tiffany has increased e-Commerce awareness, since it doesn't have as many, or any, stores at base; it will likely continue pushing online platforms in the U.S. as well. Note that the company is pushing gold and diamond jewelry collections at a faster pace than engagement and silver for now, according to the earnings call, which is a merchandising shift from our September 2018 report. 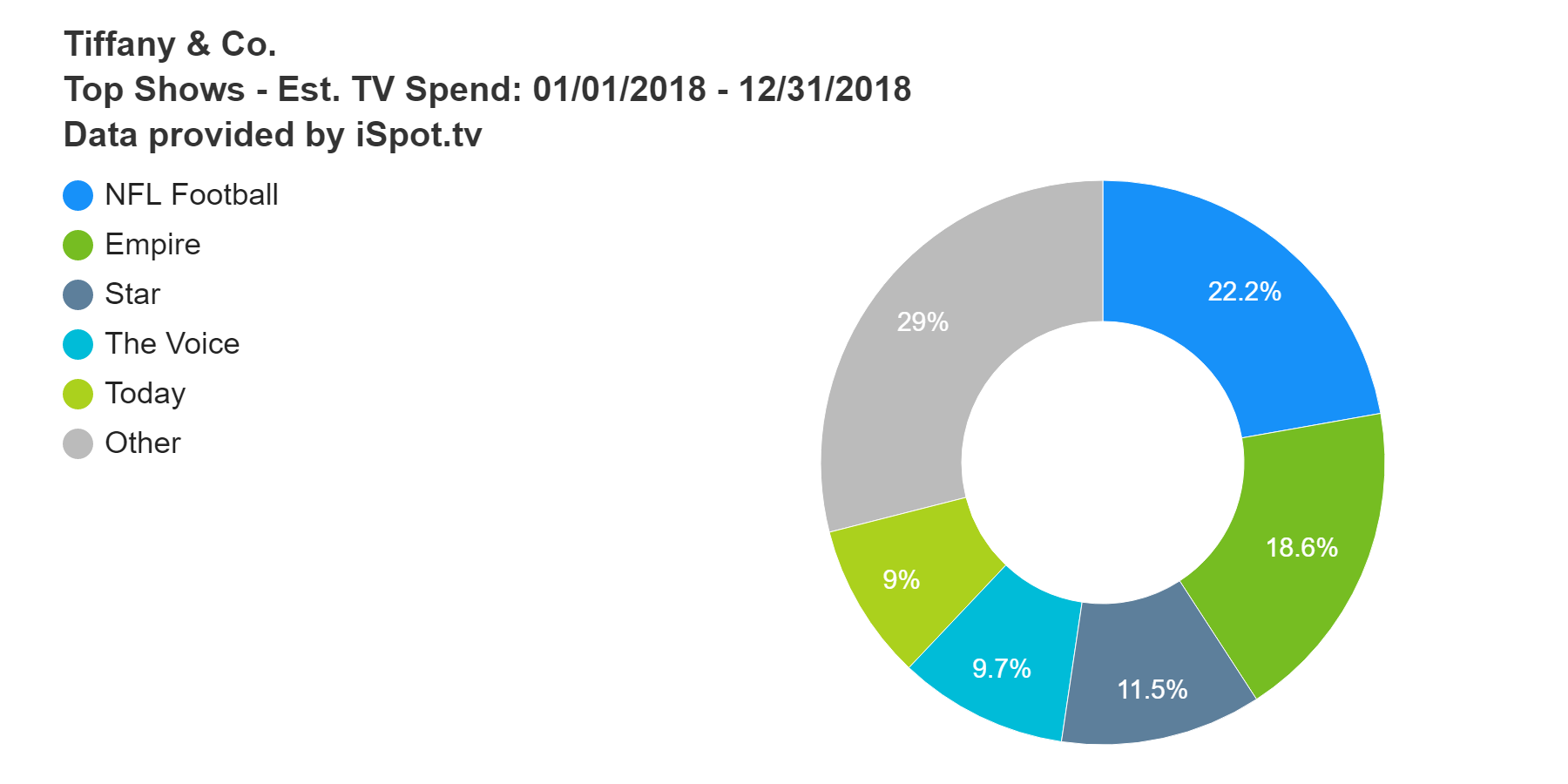 According to Adbeat, Tiffany increased digital display spend in Q4 2018 starting in October and reached a new spending height on December 4, reaching more than $150k in one day. Spending patterns this year have been fairly reflective of 2018, so this Q4 increase will likely begin again in October 2019. In the past 12 months, Tiffany has spent $1.1 million on video ads (56%) placed through YouTube ($621.2k, onto youtube.com) and ads placed site direct. Top site direct destinations have included vice.com ($62.6k), forbes.com, newyorker.com, hollywoodreporter.com and cnn.com. In the 12 months prior, Tiffany spent $700k.

Tiffany has not placed national TV ads this year so far. During Q2 2018, Tiffany spent $304.8k. Then in Q4, it spent the most on December 5 and throughout the month, reaching $2.1 million for the total year. We will likely see Tiffany spend in TV again this December, so sellers should reach out soon.

According to Kantar, Tiffany spent on radio during Q3 and Q4 last year. In Q1 2019, it spent over $8.9k on print ads; in Q1 2018, it spent $9.4 million on this channel, so print ad dollars have either shifted to the end of the year, shifted channels completely, or have been taken out of the marketing plan.

Sellers -- Heading into Q4, you should offer TV, digital display, print, OOH and radio space to Tiffany. December is a hot market time for nice jewelry: the popular, last minute gift of the holiday season. Remember Tiffany is currently focused on gold and diamond sets more than others; ask what needs to be pushed in Q4 so the proper demographic is targeted. As you can see from the TV data, Tiffany tends to place a large percentage of spending dollars soliciting to millennial and Gen X men who need to purchase last minute holiday gifts. I would imagine engagement jewelry lines would need to be placed in front of millennials whereas gold and diamond sets can apply to a wider variety of consumers, so shift your ad space far and wide.

Agency readers -- All agency relationships have hit tenure, or in other words, have been partnered with Tiffany for at least three to five years and shouldn't be in as much danger of review.  As Tiffany focuses on strengthening its digital efforts, specifically, keep an eye on agency partnerships: Laird + Partners handles creative and social strategies (start date unknown). Note that much of the push is focused on the website improvements; you may want to talk up your ability to utilize digital marketing strategies to reach multiple demographics of jewelry consumers.