Who is the President & Chief Marketing Officer of Zenith Media?

What is the email of the President, Investment of Zenith Media?

What is direct phone of the Chief Executive Officer of Zenith Media?

Who is the media buying & planning agency of Zenith Media?

During the past 12 months, Adbeat reports that Kohl's has spent $6.8 million on digital display ads placed primarily site direct ($2.4 million) and programmatically via Google ($1 million) and other ($1.5 million) networks. Most site direct placements were on answers.com ($533,100), foodnetwork.com, dailymotion.com and sbnation.com. Google has placed ads on sites such as popsugar.com ($316,700) and, surprise, surprise, kohls.com. Spend for the prior 12-month period (Sept 2017-2018) totaled $8.4 million. Thus, spend seems to be shifting towards other channels instead.

Per Kantar, Kohl's spend often spikes in Q4 ahead of the holidays. Thus, sellers should reach out during Q3 as it plans its budget spend. Along with TV and digital display, it uses OOH, print, radio and social media. Its target demographic largely consists of millennial moms. Its Curated by Kohl's launches mid-October (more details below).

Agency & martech readers - while none of these roles are strictly marketing-related, a new COO could signal potential reviews, especially considering how long Kohl's agency relationships have lasted (average tenure is 3-4 years). Your competition will include Gap.

Below was originally published on August 20:

Kohl's has announced that, in the middle of October, it will debut "Curated by Kohl's," a new product line from emerging brands available in more than 50 locations and online. The company will partner with Facebook to identify and communicate with brands with a strong online presence. Curated by Kohl's will likely include categories such as apparel, accessories and home; its assortment will refresh each quarter. It will feature the following brands in time for the holiday season before selecting its next array of brands for spring 2020:

Curated by Kohl's will introduce these brands to Kohl's sought-after female millennial (mom skew) Toy Story 4. In July, it also rolled out an Amazon returns program, supported by marketing across print, digital and national TV. 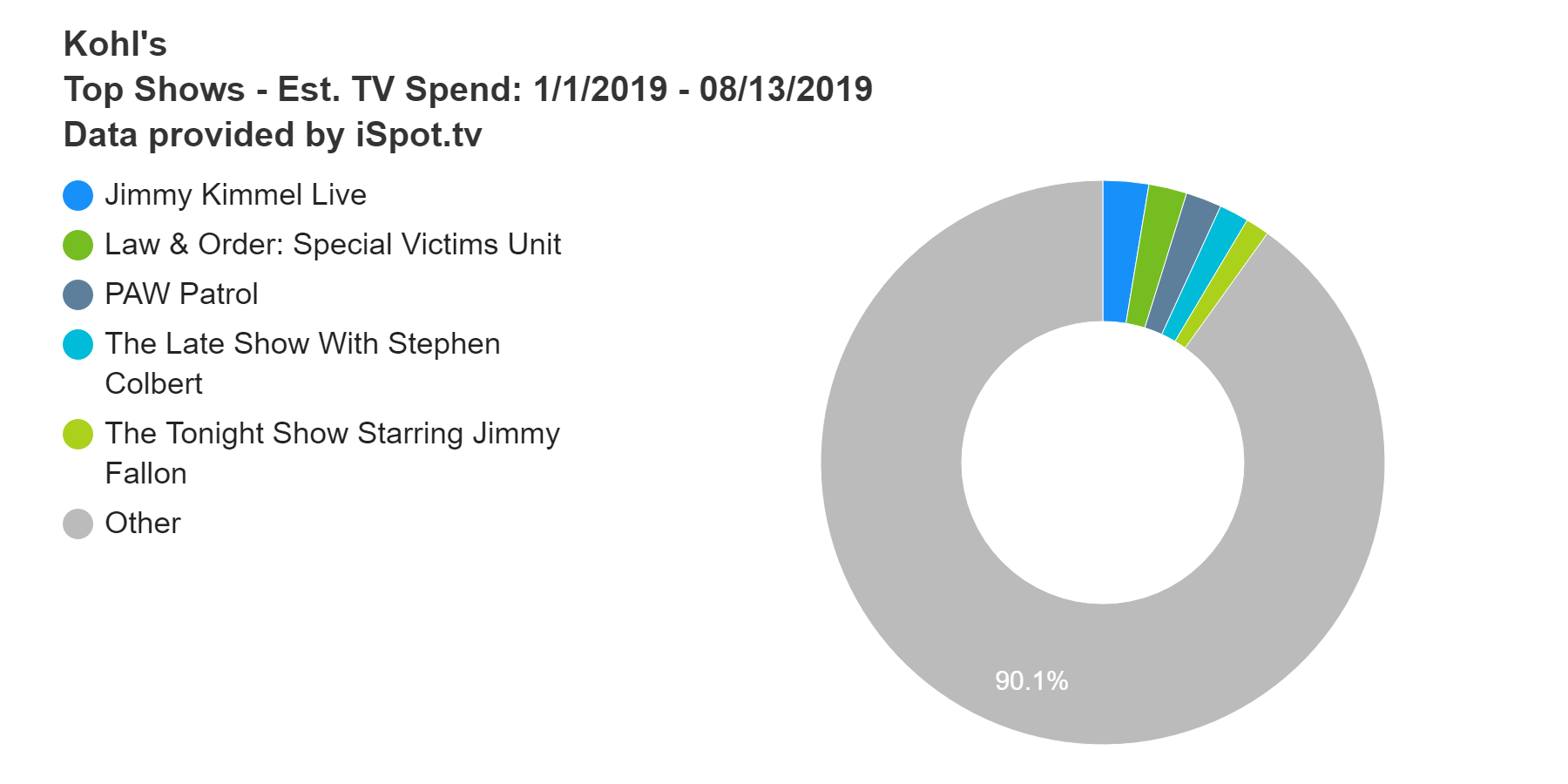 According to iSpot, a YTD national TV spend of $107 million has gone towards commercials targeting various millennial and Gen-X audiences (see targeting right). Kohl's total 2018 spend increased to $212.9 million from that of $196.5 million in 2017.

Within the past year, Adbeat reports that the retailer has spent $8.5 million on digital display ads placed primarily site direct (45%) onto site destinations including yahoo.com, answers.com, youtube.com, popsugar.com and foodnetwork.com. During the past 24 months, Kohl's spend has totaled $16.9 million.

The company's spend typically spikes in Q4 ahead of the holidays. Along with TV and digital, it tends to invest in outdoor, print, radio and social media. Per Kantar, Kohl's total 2018 measured US media spend rose to $269.3 million from the $247.3 million spent in 2017. Like I said before, its target demographic is shifting to focus on millennial moms, so sellers with high ROI strategies there will have the upper hand.

Agency & martech readers - Keep Kohl's on your radar for potential work in the future, since its relationships have exceeded average agency tenure (3-4 years). Competition will include Chicago offices, which have split media since 2013. Focus on differentiating Kohl's from competing retailers like Target, TJ Maxx, Old Navy, JC Penney and Gap.