Advertisers are signing up for eSports to compete for GenZ’s attention, check out the brands on our watch list.

Creators of Tik Toks. Enjoyers of energy drinks. Masters of memes. You know who we’re talking about – GenZ. In addition to these hallmarks, they’re known as the first generation to grow up on eSports, in a world where gaming competition is so fierce that parents have literally enlisted tutors to up their kids’ Fortnite skills.

Last year we at Winmo released a report detailing key players in the rapidly growing eSports space, and now, by popular demand, we’ve rounded up a new group of advertisers signing up to compete for gamers’ attention, either with league sponsorships, game tie-ins, or ads on streaming platforms – with key insights from Winmo to help you qualify them for partnership opportunities.

While some of these brands have hitched their wagons to eSports properties directly, others are simply known to target eSports gamers as a demographic. Ad sellers and sponsorship sellers catering to a GenZ audience should both take note of these opportunities, as should agencies and other service providers specializing in youth marketing.

Jones has become a corporate sponsor of The Race All-Star Esports Battle, a virtual event created in the wake of major motorsport cancellations due to the pandemic. The race’s inaugural week had a combined total of 12.1 million views on The Race’s YouTube channel.

Jones currently relies heavily on earned and social media in order to reach millennials, gen-Z and teenagers; however, it might branch out to new media channels under a new marketing team. From a media perspective, sellers of paid social, OTT and/or podcast ad space should reach out.

WINMO INSIGHT: Jones’ social audience composition supports its eSports play, with a majority falling in the 18 to 24-year-old range, and indexing high for Gamers. 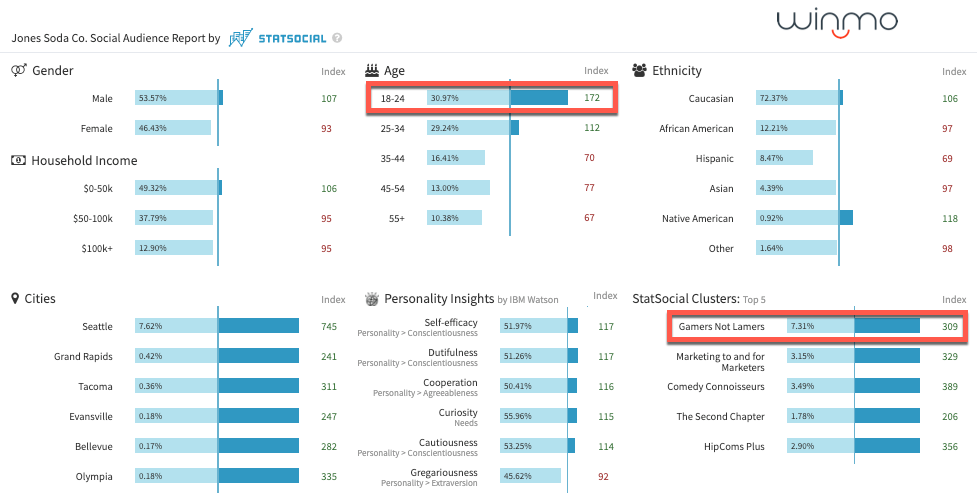 Acer has expanded its partnership with Dallas-based Envy Gaming, according to eSportsObserver. The Taiwanese computer-maker is known to the gaming world for its Predator gaming line, named the official computer and monitor partner for Envy Gaming’s Dallas Fuel. Future plans for the partnership include the Predator Gaming Lounge at Envy headquarters for local watch parties, tournaments, and K-12 seminars covering esports.

WINMO INSIGHT: In the past two months we’ve seen digital ad spend spike significantly for Acer’s Predator brand, with a vast majority placed directly. Ads have appeared on sites such as gamespot.com and minecraft.gamepedia.com. 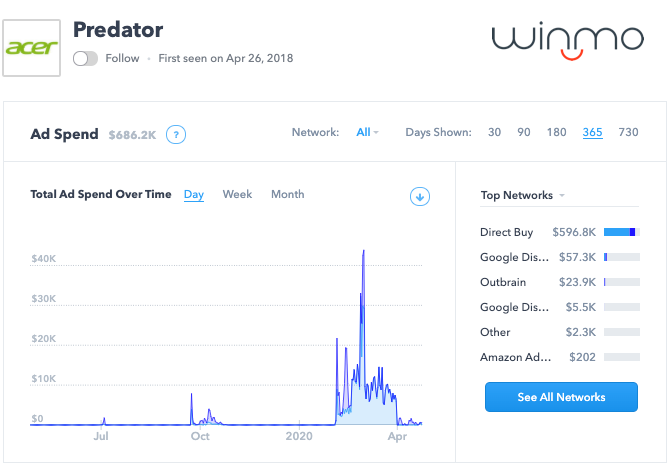 At the end of 2019, male grooming brand Axe released their first-ever eSports campaign. Developed by 72andSunny, the campaign, “What’s Your Move” consisted of a 30-second video ad starring a talking Axe can declaring “Behold, the world ender,” when sprayed. A popular line from LoL, for the non-gamers.

Axes’ parent company, Unilever, tested new ad formats like audio streaming ads on Spotify. Their 2019 media spend concentrated in the first half of the year, and we expect that to continue in 2020.

Axe’s target audiences are male millennials and Gen Z, particularly teenagers. We expect their recent decrease in TV spend to continue as they shift funds to digital and other experiential mediums. The multi-year partnership with LoL includes the Mid-Season Invitational (Q2) and All-Star Event (Q4).

WINMO INSIGHT: Looking for an “in” with Axe? Mark Lodwick is the Brand Director. Here’s a snapshot of his personality profile for any sellers hoping to make a good impression. 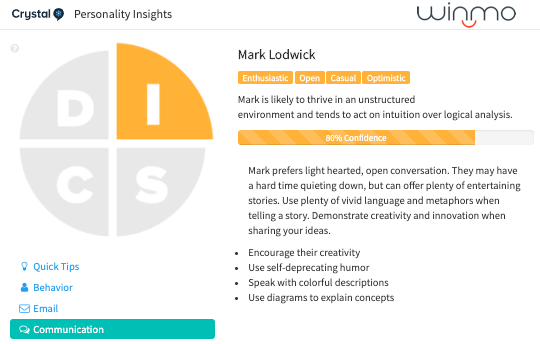 4. Bumble teams up with girl gamers

The gender angle makes this partnership interesting. The female gamer market is a growing segment that’s often neglected by marketers, one which Bumble exploits through its eSports partnership.

Bumble spent roughly $4.9 million on measured media last year, per Kantar. Here are a few of their latest digital creatives. 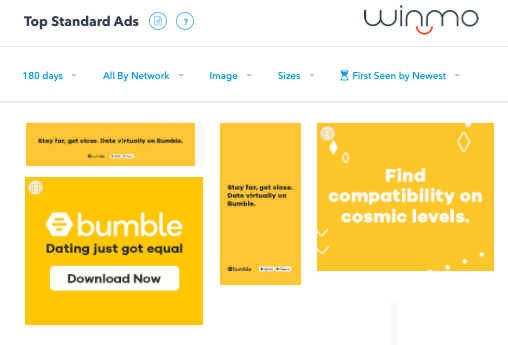 Talk about the long game. Carmaker BMW just launched a partnership with five gaming organizations around the globe, including Cloud9 in the United States and Fnatic in the U.K.

“In the long term, esports is our biggest footprint,” Stefan Ponikva, head of BMW Brand Experience Shows & Events, told Forbes. “The younger generation, born digital-first, doesn’t really care about TV or traditional advertising. Esports is our tool to reach them.”

The move reflects an effort to get the attention of gamers involved in titles such as League of Legends, Fortnite, and FIFA. And includes social, content collaborations, and branding exposure.

WINMO INSIGHT: According to the audience demographic insight in Winmo, this is fertile ground for BMW. 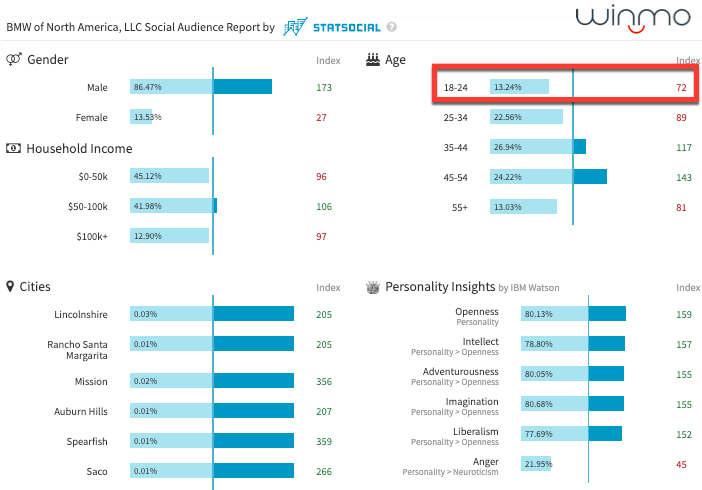 This play should make a dent in the 18-24 year old demographic that BMW is under-indexing for, and we might even see ad buys in GenZ- and Millennial-leaning publications in the coming months to support.

Abercrombie & Fitch taps into the eSports world through Twitch, the popular live streaming site, that remains synonymous with online gaming.

A&F’s Twitch spend is indicative of an overall shift we’ve seen from the brand. According to iSpot, they haven’t allocated a national TV budget since late 2017.

The company spends on platforms such as YouTube, Instagram, Tik Tok, and Spotify. We expect it to continue this focus as it aims to drive eCommerce activity right now. (For more brands boosting eCommerce amidst the pandemic, check out our post).

WINMO INSIGHT: For media sellers looking to reach A&F, The Richards Group is their primary AOR, with other relationships below. 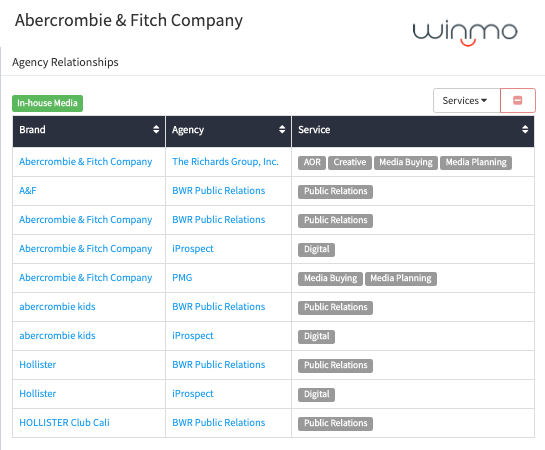 Economic recovery is in full swing, which means budgets are back, baby. Subscribe to the Winmo blog to receive actionable insights you can use now.

This website uses cookies to improve your experience while you navigate through the website. Out of these cookies, the cookies that are categorized as necessary are stored on your browser as they are essential for the working of basic functionalities of the website. We also use third-party cookies that help us analyze and understand how you use this website. These cookies will be stored in your browser only with your consent. You also have the option to opt-out of these cookies. But opting out of some of these cookies may have an effect on your browsing experience.
Necessary Always Enabled
Necessary cookies are absolutely essential for the website to function properly. This category only includes cookies that ensures basic functionalities and security features of the website. These cookies do not store any personal information.
Non-necessary
Any cookies that may not be particularly necessary for the website to function and is used specifically to collect user personal data via analytics, ads, other embedded contents are termed as non-necessary cookies. It is mandatory to procure user consent prior to running these cookies on your website.
SAVE & ACCEPT